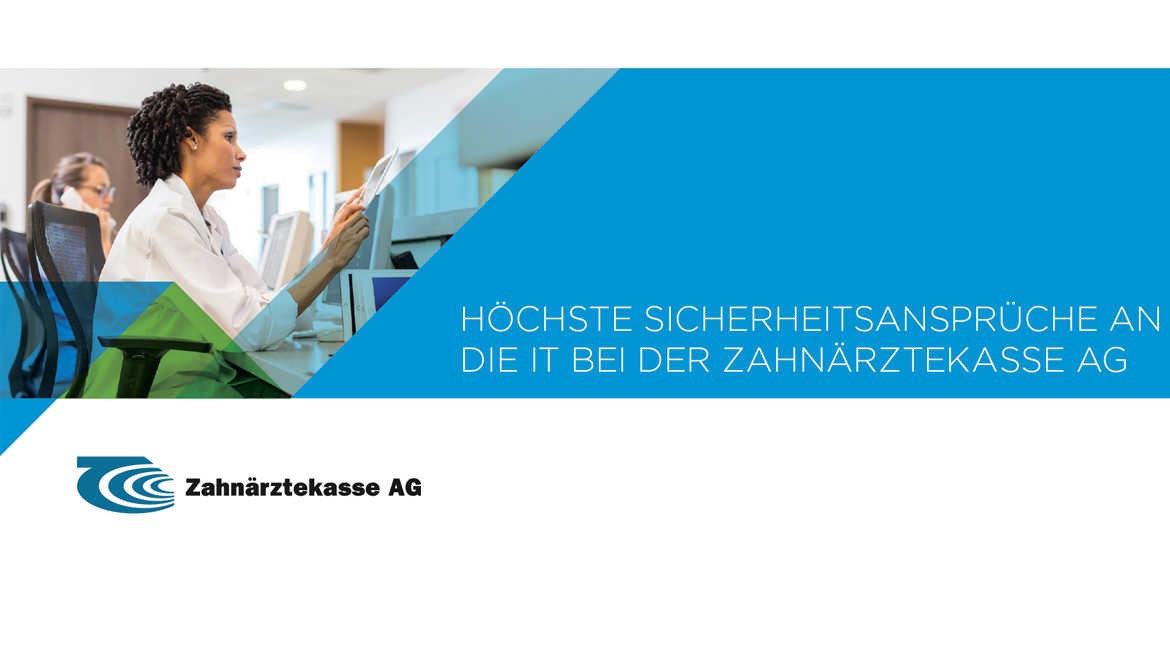 Digitalization is a major challenge for the conservative dental market. Zahnärztekasse has responded to this trend by digitizing its assets including interfaces, various platforms (www.debident.ch und www.zahngeld.ch) and the iPhone app Credifl ex, and is now considered to be a market leader and pioneer in this area. As digitalization increases security vulnerabilities, potential cyber threats are accelerating as well. According to recent studies, the healthcare sector is often a target of cyber and hacking attacks. An important strategic project in Zahnärztekasse IT is to protect against current cybersecurity threats. Sensitive patient data in the healthcare sector must be specially protected, because data breaches can cause enormous costs and a lasting damage to reputation. With its mission statement 'We make dentists more successful', the needs of its customers are key for Zahnärztekasse. Andy Hosennen, Head of IT Infrastructure and Support at Zahnärztekasse AG, summarizes: "With our financial services, we help dentists to make the most of their time. They can spend more time at the dentist's chair and with their patients and outsource the annoying and time-consuming billing to Zahnärztekasse.” Dental surgeries are increasingly demanding more information about the security levels of products and services o ered by Zahnärztekasse. In addition, a Swiss counterpart to the EU Datenschutz Grundverordnung (DSGVO) federal law on data protection is on the horizon, which will require Zahnärztekasse to further strengthen its IT security. Zahnärztekasse is also working towards ISO certifi cation, so technological innovation is a major task on their agenda.

Solution
As early as 2010, Zahnärztekasse started virtualizing its systems and built on this trend until the last systems were virtualized about three years ago. At the heart of Zahnärztekasse is their critical application ERP (Enterprise Resource Planning) system, including all customer data and business logic. Currently, approximately 144 VMs run on two separate clusters with a total of 5 hosts and one ESXi host. The virtualized storage has in total 10.5 TB for Cluster 1 (MS), 2.6 TB for Cluster 2 (ORA) and 0.5 TB for the ESXi.

The highest possible security level is the overall goal for Zahnärztekasse, because customer confi dence in data security is of the utmost importance. In cooperation with partner AGIBA, it quickly became clear that VMware NSX Data Center and VMware vRealize Network Insight was o ering a very good extension to the existing systems. Due to the positive experiences with VMware solutions so far, management and handling were already understood and the project could be implemented at short notice. "Thanks to the good preparation, we were able to implement VMware NSX Data Center and VMware vRealize Network Insight in just four days and also jointly develop the basic settings of the fi rewall regulations. Implementing a classic fi rewall would have taken two weeks," said Pascal Fröhlich, System Engineer at AGIBA IT Services AG. With NSX Data Center, individual systems can be completely separated by microsegmentation and critical systems can be completely isolated if necessary. The data were analyzed with vRealize Network Insight, so that all connections between the di erent virtual machines could be evaluated. Thanks to vRealize Network Insight, the Zahnärztekasse can set and control security guidelines and compliance requirements.

Results
Today, employees and customers of Zahnärztekasse benefi t from improved IT security. "If we protect our systems from threats, it a ects everyone - both employees and customers. Our customers trust us to handle their data responsibly," adds Andy Hosennen. And the entire company benefi ts from cost
reductions, increased e ciency and data center automation. The heart of the solution is NSX Data Center, the network virtualization platform for the software-defi ned data center (SDDC). It enables network and security features to be fully software-based and implemented separately from the underlying
physical infrastructure. Key advantages for Zahnärztekasse are central administration, simplifi cation of processes, fl exibility and massive consolidation of resources. The throughput rate is much higher than a physical solution: 5-6 GBit/s (physical solution) versus 20 GBit/s (NSX) per host - total fi rewalling
capacity in Zahnärztekasses data center is 100 GBit/s.

The transparency in the network has improved immensely through regular insights from vRealize Network Insight. Machine learning and artifi cial intelligence are also used in security programs of Zahnärztekasse. Seamless integration into the existing VMware environment and the familiarity of the 3-person IT team led by Andy Hosennen with the already known products was
the most important point in the decision making process. In addition, the reasonable price of the VMware solution and half the implementation time
compared to other options convinced Zahnärztekasse. Andy Hosennen summarizes: "I can't imagine working without VMware today. The solutions
complement each other perfectly: NSX and VMware vRealize Network Insight could be integrated into our existing system like one Lego brick on top of the
other, exactly fi tting and easy".

With the additional security gained, Zahnärztekasse is well prepared for keeping the position as market leader and meeting increasing demands of its
customers for state-of-the-art technology to cope with latest cybersecurity threats. It will obviously not increase revenue for Zahnärztekasse, but prevent
revenue from declining due to lacking responsibility for data security or ignoring updates, and customer confi dence from being gambled away.